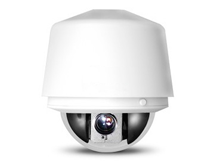 As with any imaging device, analog CCTV cameras have sensors which capture video image. The resolution of the sensor varies, but it is limited to 720×575. This is 720 pixels across the screen (horizontal resolution) and 575 up and down (vertical resolution). To maintain compatibility with analog televisions making it easier to use off the shelf products for display and recording, the signal that comes out of the camera complies with broadcast television standards.

An IP camera has an image sensor much like the analog camera. However, once it has captured its image, it transmits it as “data” over a network connection. IP cameras are computers and run operating systems not all that different from your PC. As the resolution climbs above broadcast standards level, the sensor type will always be progressive. Since an IP camera tends to have a lot more resolution than its analog counterpart, there ample resolution left for the area of interest, allowing to save hard disk space in the recorder.